In simple words, it’s the blending of digital elements – like objects, text, or sounds – with the real world around you. Augmenting your reality. It’s sometimes called Mixed Reality too. It may show overlays on phone screens to help you find directions from street views. Or superimpose a virtual dragon next to you. Augmented Reality applications span commercial industries such as education, architecture, communications, medicine, and entertainment. Let’s say, you want to redesign your apartment but you’re not sure how to go about it. Special home decorating apps allow you to look through your phone camera and virtually add new furniture at will.

Is it the same as Virtual Reality?

No. Virtual Reality creates a fully digital world around you when you strap on the VR headset on your head. It fully replaces and immerses you inside the digital scene and it’s not letting any real-world objects in. That’s why it’s hard to walk in VR headsets. I have written a separate guide about Virtual Reality.

What augmented reality devices can I use?

Mobile devices are much more powerful nowadays. They contain the necessary components for AR. Cameras, sensors such as an accelerometer, GPS, and a solid-state compass. You can also use the tablet as an AR device. They come with similar hardware for smartphones and have larger screens, so the effects can be more exciting, although that also means they are less portable. Android phones are powered by ArCore. It’s the AR technology developed by Google. It does not require additional sensors in your smartphone. You can check if your device is compatible with ArCore here. If you own iOS device from Apple you need to use a device compatible with ArKit. It’s the augmented reality technology developed by Apple.

These devices can also use Augmented Reality through a webcam. Due to the lack of portability and motion sensors, AR computer applications are a bit more limited, but you can add digital effects and animations to video calls.

While headsets are not required for AR, there are some more specific devices on the market that directly adds AR visuals to your view. One of the most popular is Google Glass. Devices like this one include eyewear that employs cameras to intercept the real world view, and then project AR imagery through or reflect off the surfaces of the eyewear lens pieces.

How can augmented reality be used for business?

Augmented Reality creates opportunities for businesses to reach their target audience in real-time. Businesses that apply AR to their products gain direct visual engagement with their audiences. This means customers can experience your products or services as they are meant to be. Currently, in the retail sector famous brands (such as IKEA, L’oreal and others) are using AR as a powerful tool to connect with their clients meaningfully and creatively. A special AR app enables Cheddar’s headline news networks to deliver live video feeds into a 3D space for users, who are able to place those anywhere in their surroundings. This new form of marketing is not only effective but it is also budget-friendly in comparison with traditional forms of marketing. Additionally, some companies are starting to build physical products with AR technology baked in.

How is augmented reality used in education?

AR in education provides unlimited opportunities for teaching and learning. Instead of remaining passive recipients, they become active learners who can interact with their learning environment. The technology provides an absolutely real psychological experience and helps to get a true virtual experience that can be realized in real life: one of the Canadian technology companies turned the wall of the school gym into a ball game by adding an AR layer to it. Then the children can throw balls at the wall to hit the floating figures and, as a result, enjoy physical exercises.

Can I use AR for training?

AR allows companies to develop trainings that are appropriate for each employee, and allow them to develop competence and confidence in their role. CAE Healthcare was integrating Microsoft’s HoloLens into its training programs, allowing physicians to practice complex medical procedures in a 3D environment. By using multi-layered graphics, even the most complex processes and methods can be simplified for the trainees. If it’s not enough, have a look at this example. Based on decades of perceptual-motor research in psychology, researchers at the Aviation Research Laboratory used AR in the form of a flight path in the sky to teach participants how to land an airplane using a flight simulator.

An augmented reality game often superimposes a precreated environment on top of a user’s actual environment. Traditional gaming systems like Xbox or PlayStation require special equipment while AR offers gamers mobility and makes every space a battlefield or playground. The game itself can be as simple as a game of virtual checkers played on a table. Probably, one of the most famous examples of AR is the mobile app Pokemon Go, which was released in 2016 and quickly became an inescapable sensation. In that game, players locate and capture Pokemon characters that pop up in the real world—on the street, in a cafe or your kitchen.

What is AR software?

Various kits for developing Augmented Reality are available on the market, so the choice depends on your needs. From the user’s point of view, ready-to-use applications and platforms that are offered for creating AR scenes can be divided into 2 functional categories:

How to develop AR software?

The implementation of Augmented Reality in consumer products requires consideration of the application design and the related constraints of the technology platform. If you want to create AR software from the very beginning, you should learn about three-dimensional modeling, game engines, know programming languages (e.g. C / C++ / C #) and how to create user interfaces for users in 3D. So it requires specific knowledge. That’s why for those who want to try AR-development for the first time, the best options are AR SDKs, which are easy to use and can be expanded with new features offered by developers. Before choosing the right toolkit, you must include many criteria:

In general, the 2010s witnessed huge strides in AR, that’s why by 2021, experts predict that we will see major growth in this industry with gaming companies focusing most of their budget and energies exactly on AR-based products. 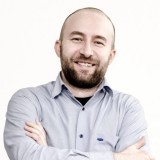 Founder and Creative Director of Pixel Legend. In the industry since 2003. Before Pixel, he had 2 companies and worked for creative agencies for brands such as Ford, Mercedes-Benz, Toyota, Amnestry International, Dell. At Pixel, Jan deals with innovation and product development.